The app allows you to search among various categories for places mentioned in one of the services: Google, Bing Maps, Foursqaure, Twitter and Wikimapia, it is “partnering” with. By partnering, I mean the app utilizes API from the respective services to display search results to the user. During these searches it takes into account the user’s location, either specified manually or by the built in GPS of the iOS device.
END_OF_DOCUMENT_TOKEN_TO_BE_REPLACED

If you are a blogger you are most likely using a blogging platform to host your blog. These blogging platforms will come with web based interfaces for users to compose blog posts. When these web based interfaces are accessed from a browser on the computer this works well, but may not be the case from mobile devices like the iPod Touch, iPhone or iPad. Of course there are exceptions, which I will discuss later.

It is hard to find an app that takes advantage of the capabilities of these mobile devices while supports the functionalities of the blogging platforms. There are two blogging platform specific apps for the iOS devices: WordPress and SquareSpace. The former is the first of its kind and its functionalities are fairly complete, but there are bugs that will sometimes cause the lost of blog posts. The latest version (2.6.3) is even worst, so this is not an app that I will recommend. On the other hand the offering from SquareSpace is very well designed. It has set the standards for all blogging apps in the iTunes App Store.

Then there are blogging apps that support multiple platforms, like BlogPress. It supports the following blogging platform/services: END_OF_DOCUMENT_TOKEN_TO_BE_REPLACED

END_OF_DOCUMENT_TOKEN_TO_BE_REPLACED

The Glif was a Kickstarter project by Tom Gerhardt and Dan Provost who had hoped to raise USD10,000.00 to develop a tripod mount for the iPhone 4.

In the end of the fund raising he ended up receiving 5,273 backers and raised USD137,417.00 for the project. I am happy to say that I’m one of those backers with USD20.00 + USD8.00 (international shipping to Hong Kong) contribution.

END_OF_DOCUMENT_TOKEN_TO_BE_REPLACED

If you enjoy looking at photos on the Internet you will be familiar with the social photo sharing site Flickr, and may even have an account on it. Aside from Flickr many have also shared photos on the social network Facebook.

The user experience for exploring photos on both of these sites are okay but they are rightfully focused on an individual rather than on the photos as they would if it was a photo browsing site, because both are social sharing web sites. Until now there are no tools to view these photos from your social graph on both of these networks together in one place, which the iPad app, Flickpad, is designed just for this purpose.

END_OF_DOCUMENT_TOKEN_TO_BE_REPLACED

The iPhone has always been a great platform for developers to innovate and invent new uses for the device. Recently L5 Technology did just that with their L5 Remote hardware dongle + iPhone app [iTunes App Store link].

The L5 Remote is an universal remote control. It comes in two parts: a hardware IR dongle attached to the iPhone (3G/3GS)/iPod Touch Dock Connector, and an iPhone app. The hardware dongle cost USD49.95 + shipping and the L5 Remote iPhone app is free from the iPhone App Store.

END_OF_DOCUMENT_TOKEN_TO_BE_REPLACED

A bit over a month ago Twitter (the site/service) purchased the popular iPhone app “Tweetie”. During the announcement Twitter also announces that they will rename the app to “Twitter for iPhone” and reduce the price to free. The name is not that original but that was intentional, because Twitter wants people to find their client of the same name when they perform a search in the iTunes App Store.

Since the acquisition the Twitter 3rd party client development community has been shaken up. The thinking from analysts is why would any user pays for a 3rd party client when there is a free official client from Twitter.

With the name change Twitter also changed the icon of the app. I think they have chosen a great icon, because it is the same as the default avatar icon in the Twitter service.

Even prior to the purchase Tweetie 2 users had already have a great deal of anticipation for the next update, Tweetie 3, so they are glad that the newly released app is basically Tweetie 3 with a name change. In this new version of Tweetie (aka “Twitter for iPhone”) there are several speed improvements and bug fixes, the most noticeable are: END_OF_DOCUMENT_TOKEN_TO_BE_REPLACED

END_OF_DOCUMENT_TOKEN_TO_BE_REPLACED

A pair of iPhone app from Omar Rabbolini, an Italian application developer currently resides in UK.

These pair of iPhone apps: CantoNotes and Hanzi Lookup, will help Cantonese speaking users not familiar with writing Chinese; like myself, learn to write Chinese characters. 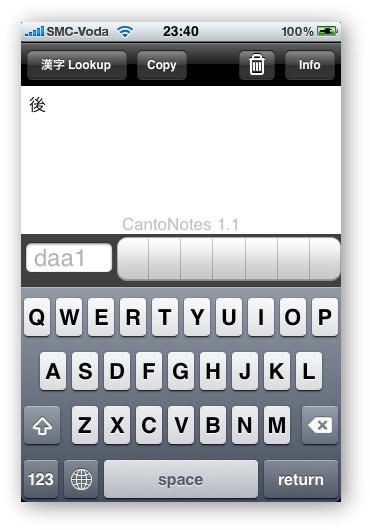