If you enjoy looking at photos on the Internet you will be familiar with the social photo sharing site Flickr, and may even have an account on it. Aside from Flickr many have also shared photos on the social network Facebook.

The user experience for exploring photos on both of these sites are okay but they are rightfully focused on an individual rather than on the photos as they would if it was a photo browsing site, because both are social sharing web sites. Until now there are no tools to view these photos from your social graph on both of these networks together in one place, which the iPad app, Flickpad, is designed just for this purpose. 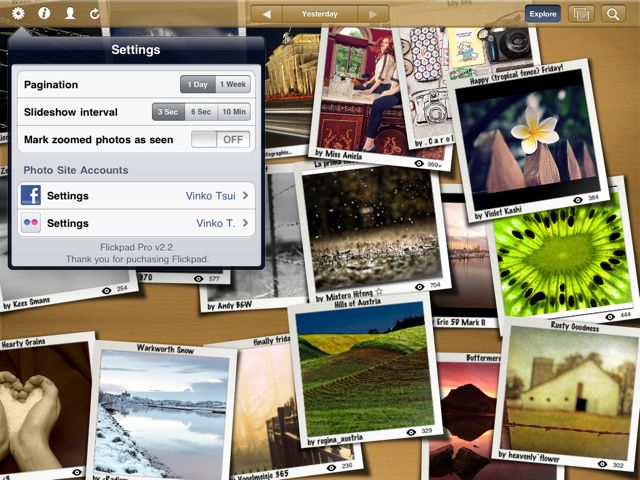 After you provide your Facebook and Flickr accounts credentials, the app will begin to load thumbnails of the new photos from your contacts on the respective sites. The nice things about this app compare to most photo viewing apps, is that it mimics the metaphor of a group of slides dumped onto a table top. As you can see from the app’s Home screen that is exactly what you see. 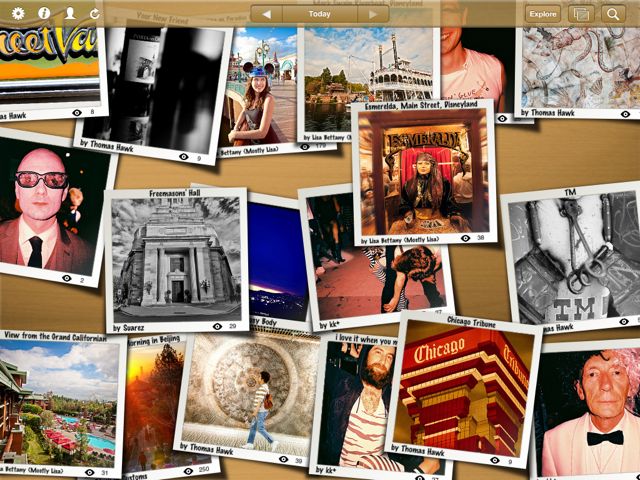 Each photos looks like the traditional slides, and you manipulate the photo slides by dragging them around on the screen. On the edge of the slides there are several useful information:

This real life metaphor begins to differ when you start to manipulate the photos. The app takes advantage of the iPad’s multi-touch capabilities and created a set of gestures for managing the photos and manipulating them on the screen. 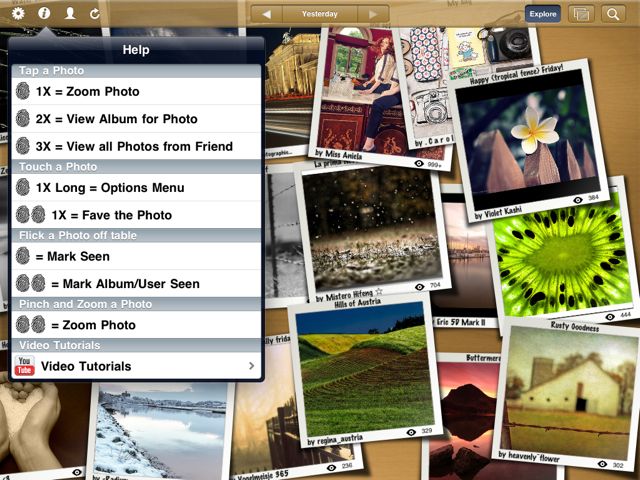 Getting familiar with these gestures may take some time. I personally keeps going back to the Info button on the Home screen to review the gestures and I had been using this app for several months; although not daily.

Some of the natural gestures:

Some hidden but useful gestures:

Overall there this is a well polished app for the iPad to address the purpose of browsing photos from Flickr and Facebook. Even if you only want to view photos from one of the two sites this is a great tool. The developer had recently updated the app to make many of the above functions behave even better. If you enjoying browsing photos this is definitely an app to get for your iPad.

Like all apps there are several features on my wish list I will be forwarding to the developer. One very useful addition will be to invoke a 3rd party helper apps to share a link to a photo or album. For example, invoking one of the iOS Twitter app to allow the user to tweet a link to one of the chosen photo. Similar to the behavior in the Mashable iPhone app, but definitely not the way the Mashable iPad app handles this same function.

Also, it will be nice to enable the actual display of the photo in the native service web site within mobile Safari.

Where to Get It

The developer, Shacked Software, is asking USD4.99 for Flickpad Pro available in the iTunes App Store and there is a free ad support version also.

One Reply to “Review: Flickpad for iPad”