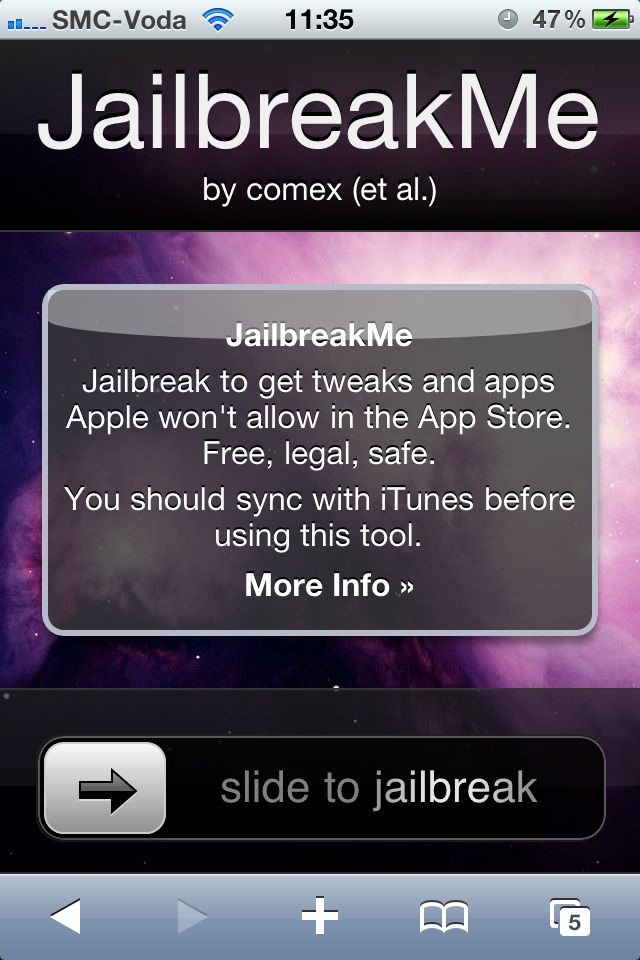 Before I get into why you may not want to jailbreak, let me first explains the steps required to jailbreak your iOS devices.

Your jailbreak is complete. This is the second time Jailbreakme.com method has been used to jailbreak iOS device, and it is the simplest method.

Now that it is so easy to jailbreak, let me explain why you may not want to TRY.

Prior to the ruling there was also rumors to say that iOS 4.1 has a “jailbreak watermark” in iOS 4.1. Although this rumor has since been dismissed and members of the iPhone Dev Team claim that if there is one they will be able to remove the “watermark”.

Now the courts rule that jailbreak is legal in the US, Apple may begin to step up their efforts to identify iPhones that has or had been jailbroken.

With the initial release of Jailbreakme 2.0 there is a bug that disabled MMS and FaceTime  (iPhone 4) on the iPhone. Hours later the bug was corrected but for the less technical you will need to restore your iPhone and reapply the Jailbreakme 2.0. This is just one example of the effects jailbreaking may have on the functionalities of the iPhone apps.

The most common reason to jailbreak the iPhone is to be able to install MyWi to configure the iPhone into a WiFi hotspot. There are now reports from several people that mobile carriers are showing signs that they are planning to distinguish these type of traffic and charge the customers at their tethering rates.

As you can see the benefits of jailbreak may not be for everyone, so before you decide to jailbreak you should carefully consider your needs for a jailbroken iPhone.

One Reply to “Why You May Not Want to Jailbreak iPhone or iPad?”