The Google Reader web client on the iPhone is not bad, it is one of the better web applications from Google aside from GMail. May be that is why there are very few iPhone client made for Google Reader.

Newsie is such a client developed by Instant Voodoo Magic and released in the Apple iTunes App Store this month. It allows users to browse feeds they had set up in their Google Reader accounts. 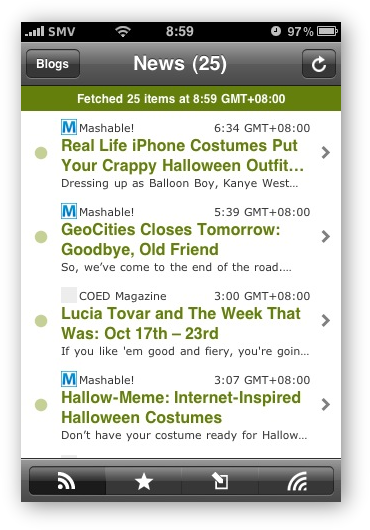 Newsie presents the list of feeds and folders from the user’s Google Reader account in a list called “Filter News”. This is strange choice of taxonomy, as it is displaying the content normally found in the Feeds section of a Google Reader account. On the “Filter News” screen the user can choose either to look at their feeds based on “Subscriptions” or “Folders & Tags”.

After selecting a feed/filter, the user is presented with all the articles from the chosen feed(s) on the Articles screen. To indicate an article is unread, a green dot appears on the left and the title is coloured green. Clicking on any part of the article summary will bring up the Article Details screen.

On the Articles screen there are 4 icons at the bottom tool bar, which are a bit cryptic. The first icon represents the feeds in the Articles screen, follow by the icons for the list of Starred articles, “My Notes” and Shared articles. Although, these icons may make sense after one finds out what they are for, they can be reworked to make them a bit more intuitive.

Unfortunately, the “Mark All Read” button/function is at the end of the Articles screen. This may be convenient for some users who read all the items (25 or more, depending on your settings) within a feed, but it is a sign that the developer may not have considered all use cases for this application.

Having said that, Newsie does have several features that users of Google Reader have come to expect. Like emailing an article to a friend and marking an article for “Sharing”. This latter feature is very important to me, as it is my way of sharing articles on various other social networks: FriendFeed, Facebook, Twitter, etc.. Surprisingly this sharing feature is not something that exists in the, free Google Reader client, NetNewsWire. 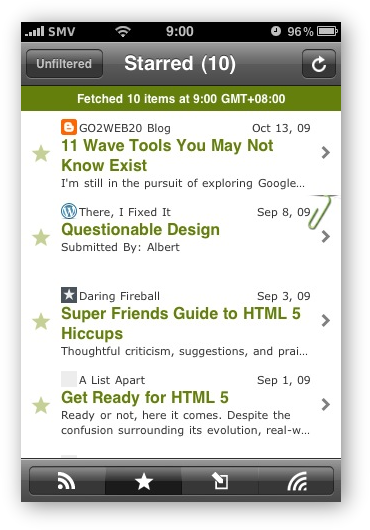 There is a clever innovative UI in Newsie that allows the user to quickly toggles an article as Read/Unread or Favorite. The user simply have to slide an article to the left in the Articles screen. 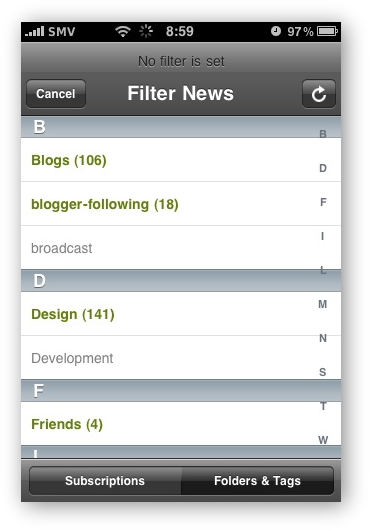 The really quirky feature is the way Newsie presents the folders from Google Reader. It lump these and feeds into what it refers as Filters, this is confusing for experienced Google Reader users. Aside from the icons, the chosen taxonomy also needs some rethought. 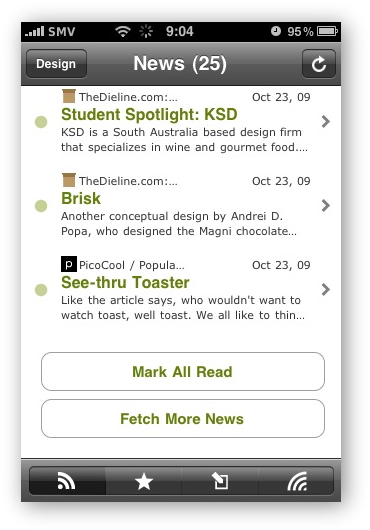 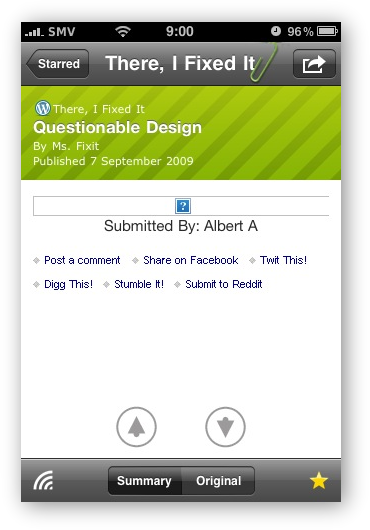 At the price of USD3.99 that Instant Voodoo Magic is asking, this needs to be a more refined application compared to the free Google Reader web service. The only reason to pay such relatively high price for an application is to encourage the developer to rethink the application’s features, and hopefully with 2.0 it will be a much better application.

In the mean time I suggest readers consider the free NetNewsWire or just stick with the web based version of Google Reader via Safari.