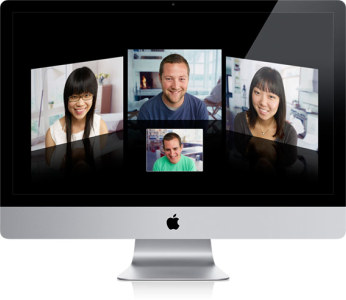 Both of the new iMac models announced today capable of attaching an external display up to a 30 inch at a resolution of 2560 by 1600 pixels, but most interestingly is that the 27-inch model’s Mini DisplayPort also supports video inputs from DisplayPort equipped devices like the MacBook and MacBook Pro.

The new iMac also has a built-in SD media card slot, enabling quick transfer of videos and photos from camera to Mac.

The 27-inch models now come with Quad Core i5 or i7 Intel processors with 8MB of L3 cache, with the latter i7 version capable of Hyper-Threading.

Along with the new iMac Apple released a VESA Mount Adapter Kit for use with either iMac models and the Apple LCD Cinema Display, allowing the iMac or the Cinema Display to be mounted on any VESA compatible mounting solutions.