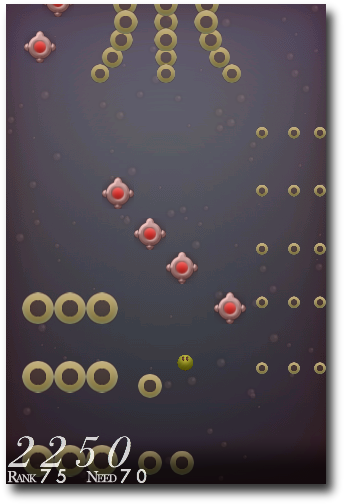 EatWillGrow is another one of those retro arcade style game with a twist.

The goal of the game is simple as with others games of this genre. You have a little green ball figure; with a smily face, that you manipulate on the screen collecting different sizes balls, while trying to avoid land mines; diamond shapes with red dot, if touch that will be game over.

The balls you collect come in different sizes and they flow down the screen in various patterns. I wish these patterns are random but they are the same each time. Mixed in the field of balls are bonus balls. Some of these balls when captured can slow down the game offering you a moment of rest, and others will speed up the game so that it can be even more challenging.

If that is all EatWillGrow does, it will be no different than the many cheap games on the NDS, fortunately there is more. How can an iPhone game, with any salt, be sucessful without using some of the native capabilities of the iPhone?

To move the little green ball figure around the screen, you can tilt the iPhone in the direction you like the green ball figure to move. But I find this analogy a bit hard to get use to, as it is more natural to have the opposite behaviour. Although after several sessions or after reading my instructions here you will start to get use to this behaviour 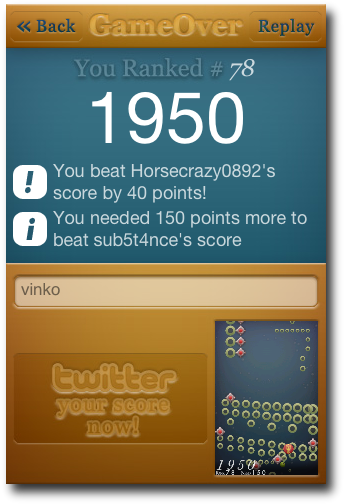 This is not enough for the developer. He also implemented a viral marketing element into the game by allowing each player to tweet his score onto Twitter.

As with any retro arcade style game, like Sticky Licky that I reviewed in April, the ultimate goal for the player is to get onto the top of the players ladder board. Again the developer took a different approach by comparing the player’s score with others on the Twitter network, and then announce to everyone on the network how many more points the player needs to move up the ladder board.

All these approaches serve to promote the competiveness of the game and to convert each player into a marketer for the game every time the game is played. For this, I say the developer Kode80 is brilliant!

In conclusion this little game is well worth the USD0.99 the developer is asking for in iTunes App Store.