My broadband service provider, Netvigator (by PCCW), throw the switch of my broadband connection this morning to upgrade it from 30 Mbps to 100 Mbps.

Although Netvigator has fiber services to homes unfortunately this is not available for my home. Instead what Netvigator offers at my address is DSL at 100 Mbps. Since my DSL modem was recently (3 months) upgraded all that was needed was a setting change at the PCCW exchange.

With this new technology it means most customers who receive broadband services from Netvigator will have or will soon to have 100 Mbps bandwidth if they want to upgrade. 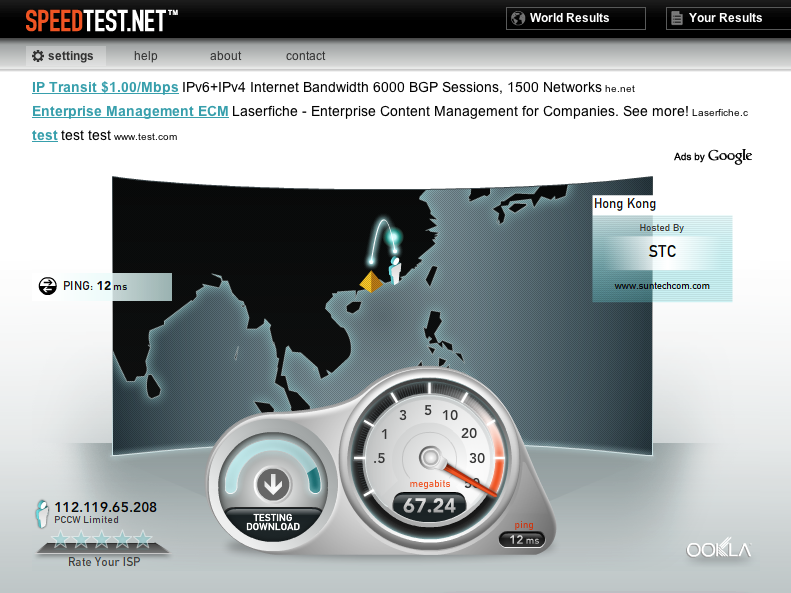 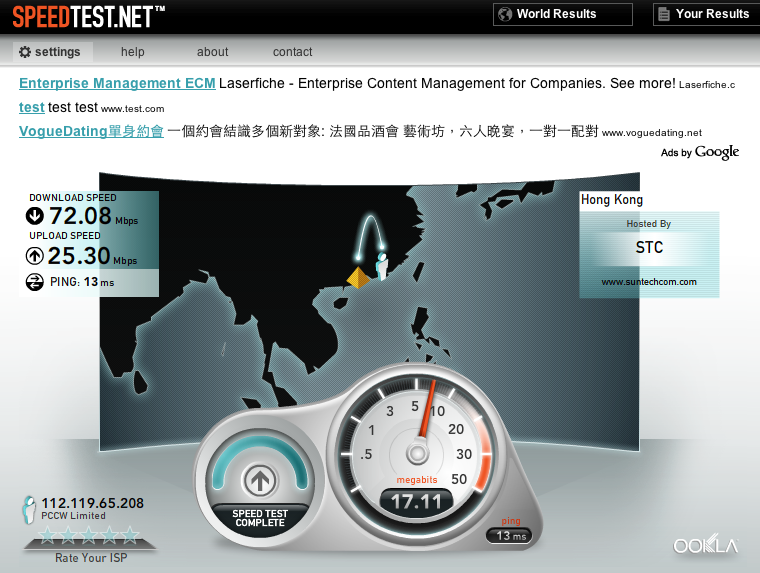 I am now getting an average of 69 Mbps for downlink and 25 Mbps uplink. Previously when I was subscribing to their 30 Mbps service, my downlink was averaging at 28 Mbps and uplink was 8 Mbps.

Since this is not Netvigator’s FiberDirect service it is not a symmetric 100 Mbps (both downlink and uplink), but a bandwidth that offers theoretical 100 Mbps downlink and 30 Mbps uplink.

I use SpeedTest.net to check the speed but since it’s scale does not go pass 50 Mbps I am not certain it is truly accurate. Using HK Broadband’s test I was able to confirm that I do have a 100 Mbps (downlink) connection.

You may say, why do I need that kind of speed at home? Will I actually be able to utilize it? Keeping in mind there are many factors that reduce the quality of experience when accessing content over the Internet. One of the main bottleneck being the country’s (city in the case of Hong Kong) connection to the Internet and the speed of the web service provider to serve the content/service you are seeking.

In my case the decision to upgrade to 100 Mbps was simple; given Netvigator’s offer of only an additional HKD18/month and only another 12 months to my previous contract. Plus since the day I subscribed to Netvigator’s 8 Mbps service the number of individuals and the type of content/services they access through the Internet had grown in my household, having a bigger pipe just eliminates one of the many bottlenecks that may result in poor quality of experience.

I do suggest people upgrade to 30 Mbps if they can find a good deal, and to 100 Mbps if they are already on the 30 Mbps service and it is available at your location.

Since there was no modem or wiring changes, the improvement has to do with the switch and/or circuit at the PCCW exchange, the 100 Mbps allowance and the algorithm to manage the bandwidth allowance.