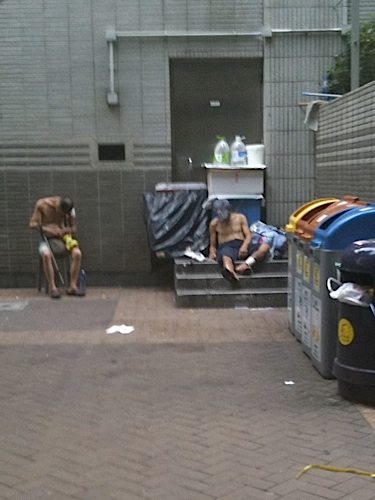 View Larger Map
For many years the sidewalk near O’Brien Road and Thomson Road has had a problem with the drug addicts hanging out around the clock in the area. The exact spot is the area in front of the Wanchai pedestrian walkway stair case. This is because a drug addiction center is situated right next to the location.

The drug addicts would leave chairs to sit. Some of them bring their unleashed dogs, which are dirty and looks as if they are diseased. Many of them also have various personal items stashed or hung in the fences of the MTR exit. All this caused a major hygiene problem, several of them also lay drunk along the sidewalks, shooting up near the MTR exit flower beds, or sell drugs openly.

This area is a major tourist area, of the easy access to Wanchai Computer City and with the walkway to the Hong Kong Convention and Exhibition Center. The area also has heavy local pedestrian traffic, because the pedestrian walkway connects many government offices: Immigration Tower, Inland Revenue, Traffic Department, other private offices and hotels to the Wanchai MTR entrances. It is also area where many of the cross harbour buses unload their passengers returning to their apartments in Wanchai mid-levels.

During the municipal election, I once mentioned to a candidate about the problem at the location, a few weeks later the city Health & Hygiene department, ambulance and police all worked together to clean up the area. Unfortunately, this cleanup lasted only a few days and the drug addicts took over the area again.

After numerous complaints to the city and City Council, something was finally done on June 19th. The area was cleaned again by the city’s Health & Hygiene department, all the chairs and personal items were removed and the police made some arrests. This time it kind of worked. The drug addicts left the area and was afraid to return, but instead they moved a few meters down and now hangs out in front of the 7-11’s air conditioned doorway. As you can see from the photo, some of them just lay around sleeping along with their belonging.

Of course the only solution is to move the Drug Addiction Center some where else. The problem is where? I do not want this in my neighbourhood, but who would.