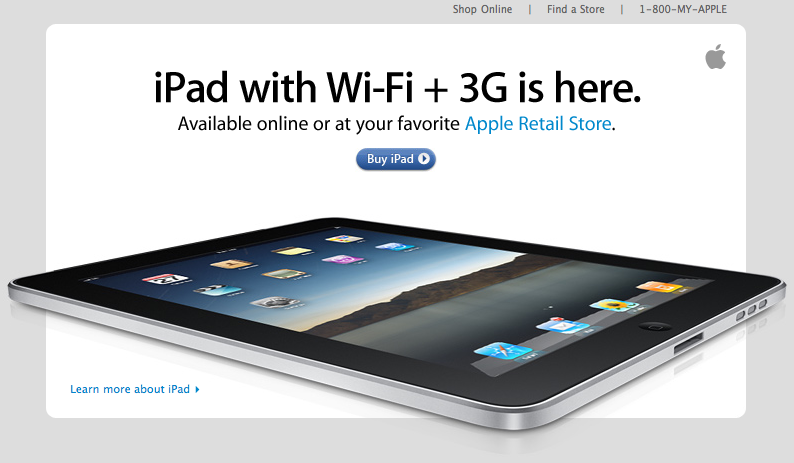 Just received an email from Apple Marketing to let me know that the iPad WiFi+3G version is now available for order at the Apple Store US and Apple retail stores in the US. In the same email, Apple reminds its readers that there is an “iPad order limit: two per customer. While supplies last.” I wonder if this means the entire iPad line or two per model? From the reports throughout the Internet there may indeed be a 5 units “life time” limit per person.

Going to the Apple Store US indicates that the estimate ship date for the iPad WiFi+3G is May 7th, which is the previous rumored date of availability.

Given the track record for the rumor of the May 7th date, it is also fairly certain that the “initial” international availability of the iPad is most likely the rumored May 22nd date (a Saturday). These dates are very different from Apple’s normal product release dates of Tuesday. The iPad (WiFi version) was first made available on a Saturday. Now the WiFi+3G version is being sold on a Friday (April 30th), so having a May 22nd release date for the international version of the iPad is not unlikely.

Given the rumored announcement of the 4th generation iPhone and iPhone OS 4.0 will be most likely during the keynote of WWDC 2010 on June 7th (a Monday).