These phones and tariff plans will be available to all starting tomorrow, July 10th, along with a 2-year contract. For existing 3 HK customers there will be 12-month contract at special upgrade prices. Details of which will most likely depends on the number of months into and the tariff plan of the existing contract. 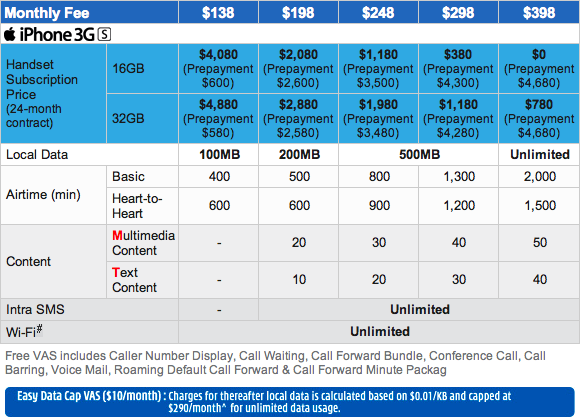 [Updated: July 9, 2009, 18:00]
Finally able to get through to 3 HK Sales Hotline; understandably busy this afternoon. They clarified the “unlimited local data” definition, it is indeed unlimited. The HKD290.00/month cap based on HKD0.01/KB only applies to tariff plans of HKD298.00 and lower. This HKD290.00 is only a cap on the additional data charges and does not mean the data access will stop after the customer incurred an additional HKD290.00 of data usage.

So far, the Apple Online Store Hong Kong still does not show any signs of it making the contract-fee versions available tomorrow. There were rumors yesterday saying that the July 10th launch is only for 3 HK and the rest of the Apple HK retail channels will not have the iPhone 3GS until months (6) later. For anyone who lived in Hong Kong long enough, we hope that is not true. As I for one will not want to switch to 3 HK nor get bound to a 2-year contract.

15 Replies to “Prices of iPhone 3GS in Hong Kong [Updated]”