All of you should have heard by now, Apple announced the new iPhone 3GS last night (HKT) during the WWDC ’09 keynote speech.

Apple Online Store HK quickly updated their pricing of the iPhone 3G 8GB to HKD4288.00 when the keynote ended, but Apple fail to provide a pricing for either of the iPhone 3GS models (both capacities: 16GB and 32GB) or availability on their site. 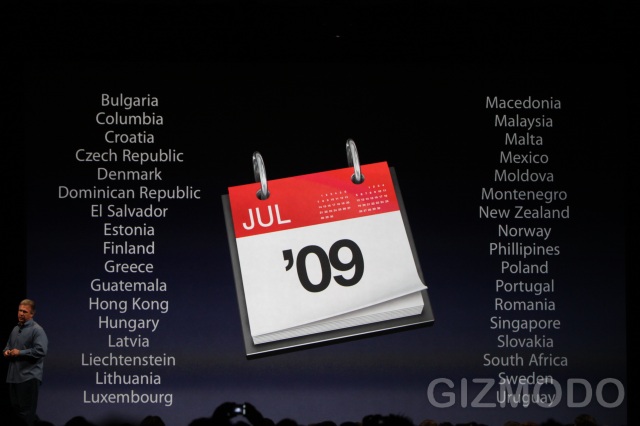 Although, from the slide that Phil Schiller showed (which apparently I missed last night, while watching the keynote via UStream, Gizmodo and MacRumors) the iPhone 3GS will be available in Hong Kong July 2009 along with 23 other countries. Based on past experience, this date may only apply to purchases from “3 HK”; Apple’s official carrier partner in Hong Kong. I am hoping that this is not the case, and it will it be available to the “SIM unlocked” models sold through Authorized Apple Resellers and Apple Online Store in Hong Kong.

AT&T also announced pricing for the new iPhone 3GS models. With early upgrade prices at USD399.00 and USD499.00 respectively for the 16GB and 32GB models. This comes with a USD18.00 upgrade fee and a 2-year contract. So if that is correct, the estimated SRP (list price) from Apple Online Store HK will most likely be the previous HKD5400.00 and HKD6200.00 fo the 16GB and 32GB models.

One thing Apple also did during this keynote/product announcement was to offer feature improvements to their existing Macintosh product line while lowering their prices. I hope this carries through to the “Officially Unlocked” versions of the iPhone 3GS sold in Hong Kong.

I guess only time will tell and we just have to keep a close eye on Apple Online Store HK.