Ever since I started using TweetDeck this past January, as my desktop Twitter client, it had been my client of choice and I wished there is a similar client on my iPhone.

Just a quick description of why TweetDeck is not a normal Twitter client. It has the standard functions to allow users to see @Replies and DMs (Direct Message), perform operations to Follow and Unfollow people. The additional function that TweetDeck has, which most other clients don’t (except for the recently introduced desktop client Seesmic Desktop), is it ability to allow users to create Groups to manage the 100s or 1000s of messages (tweets) from the people you’re following. This problem is worsten when you are following 100s or more people (peeps). On average, as of this writing, there are over 2 million tweets a day posted onto the Twitter network. Without the use of clients like TweetDeck it is not practical to follow more than a 100 peeps.

Since the introduction of Twitter API, there had been many 3rd party Twitter clients created for the iPhone. The two most popular being Tweetie (paid) and TwittedFon (free), but neither allow the user to place people they follow into groups like in TweetDeck.

That is not until the release of TweetStack, the application refers to these TweetDeck like grouping function as “Stacks”. The user can create several different types of Stacks: Friend, Search, TwitPic and Location. All of which are represented as labeled icons in the toolbar at the bottom of the screen.

The number of icons shown across the toolbar, including the All, Replies, DM, Favorites and More icons can be changed within the application settings, accessible from the iPhone’s Settings icon. 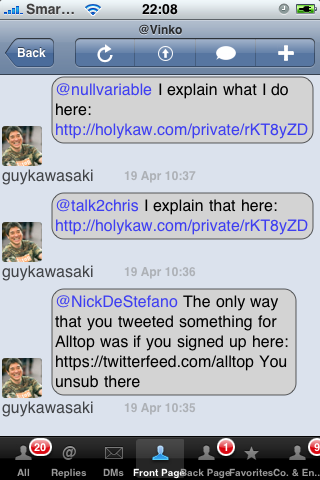 The default is to show 5 icons, with 6, 7 and 8 as options. When there are more icons/Stacks available than specified, the far right icon will change into the “More” icon. Clicking it will display a list of stacks to choose from.

Clicking on a peep’s avatar icon will slide up a pane for the user to view the individual’s Profile, “Add to Group” or “Create Group”.

Clicking on a tweet will bring up one of two Tweet settings pane depending on whether the tweet was a reply to someone or not. The version  that is will have an additional “Load Conversation” button to see the entire conversation of a tweet.

Double clicking on the empty spaces in the stack will bring up the Stack settings pane, which contains the buttons:

On the top of the page is a navigation bar. The purpose of the navigations are fairly self explanatory except for one, go “Back” a screen, “Refresh” the display, not sure what the “up arrow” icon mean, create a “New” tweet and “Add a new Stack”.

The “up arrow” button performs an upload of the stacks, but not sure where these uploads went and how to download the uploaded stacks.

The advantage TweetStack has over other clients is with it’s grouping feature, unfortunately, it is overshadowed by it’s quirkiness and unpolished feel. It choose to use slide up panes instead of switching windows for displaying settings, which there are many. I don’t think this is the right UI choice. 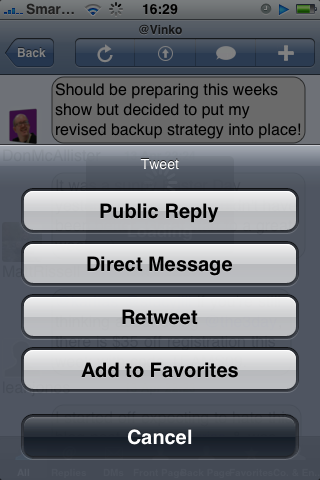 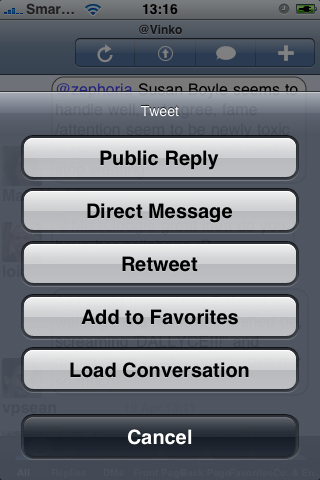 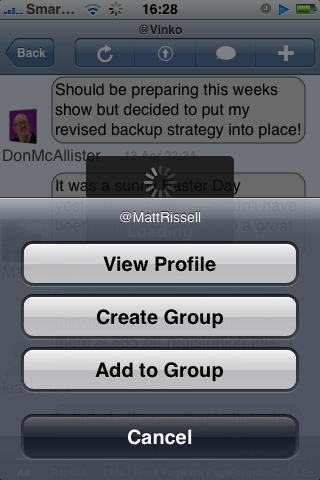 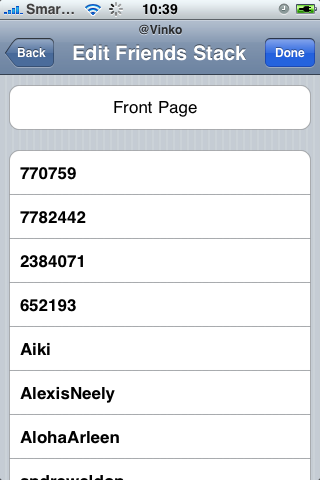 For some reason the Edit Friend Stack screen does not show all the individuals that I follow. Plus there are several individuals who had their Twitter ID shown instead of their Twitter Username or Real Name. This may be caused by quirkiness in the Twitter API, but I did not see this in other Twitter clients on the iPhone.

The individuals that are shown does not appear to be based on any particular selection criterions from the 100s of individuals I am following.

Hopefully TweetStack‘s next version will be much more stable and some of its usability elements refined. For people who follow more than a 100 people the USD2.99 it is asking for on iTunes App Store may be worth it.

Note: the version I reviewed above is 1.0.1 and the developer had already informed me that 1.0.2 with many bug fixes and improvements had been submitted to Apple for approval. As soon as the new version is available on the iTunes App Store, I will do an update of this review.

One Reply to “Reveiw: TweetStack on iPhone”