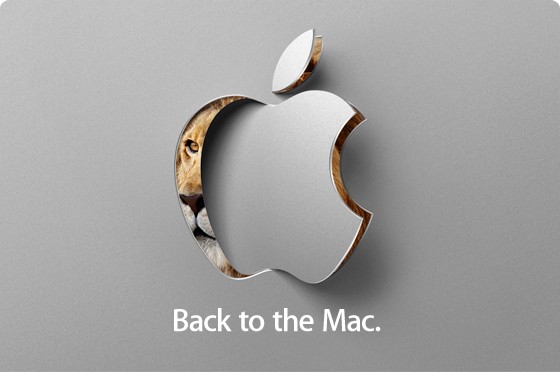 On Wednesday, October 20, 10:00 (US PDT) Apple hosted their “Back to the Mac” event in Cupertino, California, USA.

During the event they introduced the new iLife ’11 with the same suite of 5 applications: iPhoto, iMovie, GarageBand, iWeb, iDVD. They also gave a sneak peek of the next Mac OS X version 10.7 (aka “Lion”) and FaceTime for Mac. The “one more thing” as this announcement was the brand new MacBook Air (late 2010).

Most features are the same here. Steve Jobs highlighted the following features:

Apple greatly enhanced the user experience of creating photo books. With the addition of Letterpress cards this will challenge the needs to purchase physical cards any more.

Apple added some very impressive features to this version. Jobs highlighted the following:

Of the five applications in the suite iMovie ’11 enhancements seem to be most impressive to me. Apple added audio graph to every clip view, including the Project view. The new audio editing feature is of professional quality, with very simply interface for adding special effects to audio.

Speaking of Movie Trailer, this is a new feature that makes creating quick trailer to a movie very simply. Not sure how practical it is for home movies. I guess in the case of home movies these are not trailers but the actual movie you will want to share with family and friends. Because we all know how boring watching someone else’s home movie can be.

This Movie Trailer feature comes with a storyboard to guide the user through the creation of the trailer, but there is no mention of how easy it is to customize those storyboards aside from changing the text in each.

Most of the features here are the same. Jobs highlighted the following for GarageBand ’11:

The Flex Time and Groove Matching appear to be great enhancements for musician, but since I’m not a musician I cannot comment fairly on it. That applies to the other highlighted features also.

There are not much that was changed. Apple added the ability to add widgets to web pages. They supply nine of them:

I kind of hoping that Apple releases an application to create interactive iBooks, and enhance audio content for iTunes Store. May be next version.

Finally FaceTime will be available on the Mac. Although in beta right at the moment, users will be able to FaceTime with iPhone 4’s and iPod Touch 4G when it is released. If you have a Mac or one of the new compatible iOS device you can download the beta to try.

Nothing much can be said since it was just a sneak peek at the OS. As Steve Jobs explains, iOS is based on OS X and now it is time for OS X user interface to be redefined base on lessons learnt from iOS. Details of what to expect can be best seen in Apple’s video. It is expect to release in the Summer 2011.

One new addition to OS 10.7 that we get end of this year is the new Mac App Store. This new store will be similar to the App Store that existed for the iOS devices. Apple will offer the same deal to developers and developers will have to apply to have their apps included in the App Store.

The idea of the Mac App Store is great and has been discussed since the appearance of the App Store for iOS devices, but how well will developers receive this new method of distributing their apps? Given the troubles many have encountered with the current App Store approval process. I’m sure the smaller software developers will welcome the idea, but the adoption of the Mac App Store but large software developers like many of Apple’s competitors: Adobe, Microsoft and Google, will be a sign of approval for this approach.

What happens for software that are not distributed through the App Store? Are they placed in a sandbox on the user’s Mac? We will not know until Apple begins to release more information regarding the Mac App Store.

For Macintosh users the Mac App Store will be a huge step towards a ease of mind. The user no longer have to rely on the software to check for updates, or manually search for these potential updates themselves. Not sure if this approach will eliminate malwares, given the number of hacks that existed in apps that got pass Apple’s App Store screeners.

For the latter, does Apple have some new method up its sleeves? I just hope that Apple can do a better job than the iOS App Store approval process.

This is Apple’s thinnest and smallest Mac they’ve ever made. The thickest part is only a mere 0.68 inch and it tappers to an incredible 0.11 inch.

All MacBook Air models will come with the following:

In the past because the MacBook Air does have a built-in optical drive, it was difficult to reinstall the OS. With the release of the new models Apple has decided to ship a Software Reinstall (USB flash) Drive with each MacBook Air.

From the gallery of images on Apple.com for the new MacBook Air, they review what appears to be a SD card slot on the right side of the MacBook Air, like those available on MacBook Pro since mid-2009. Strangely there is no mention of such a slot in the Tech Specs on the site.

[Updated: October 21, 2010, 10:00]
The apparent difference is that the 11-inch models do not come with a SD Card Expansion Slot where as the 13-inch models do. This can be clearly seen on Apple’s MacBook Air comparison page for the new models.

You can watch the full keynote on Apple’s Events web site.