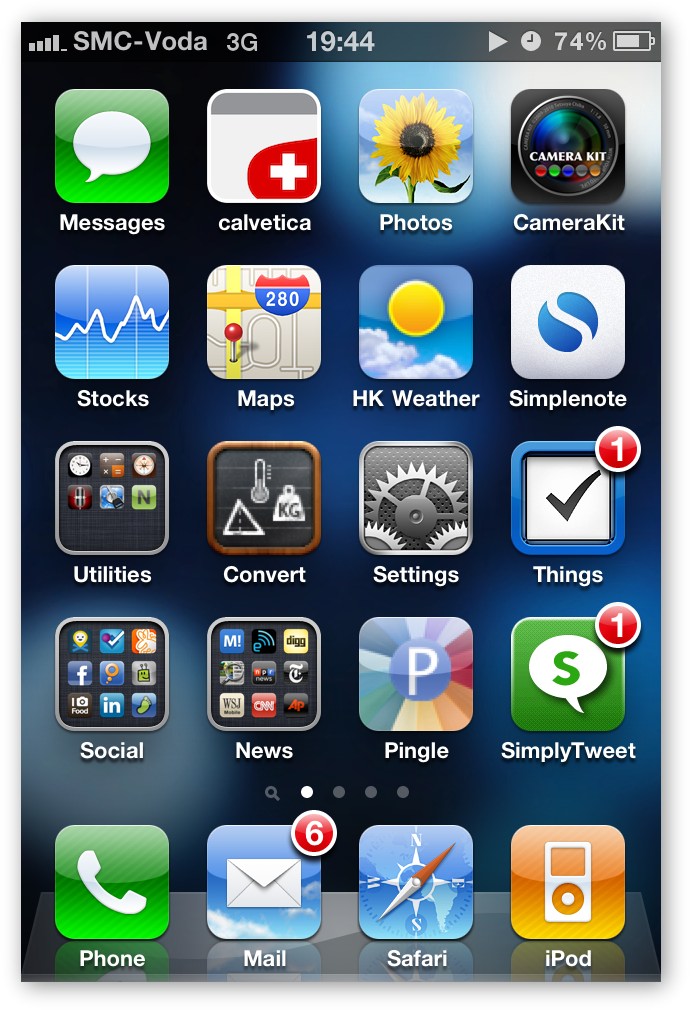 Now let me explain what these apps are in my Home screen. May be you will find them useful yourself.

I will not bother with the Apple built-in apps, since you are probably familiar with them. I will first describe the ones outside the folders then the ones within the Utilities, Social and News folders.

USD2.99
This is my replacement of the built-in Calendar app. It has an elegant display with all the information presented on a single screen.

Without any configuration it picks up all the calendar events that was in my iPhone’s Calendar app. Although it is relatively expensive, I think this is a good alternative to the built-in Calendar app.

USD1.99
I use this app as my replacement for the built-in camera app. Mainly because it comes with several features that can make a poorly taken photo look much nicer. Although, with the iPhone 4 camera it is harder to take a bad photo.

This app also has the ability to turn on and off watermarking which is becoming important with so much online photo sharing.

Free
The full name of this app in the App Store is “Hong Kong Weather”. Since I currently lives in Hong Kong I use this as my replacement for the iPhone’s built-in Weather app.

This app displays all the pertinent information from the Hong Kong Observatory (HKO) and it is usually updated within several seconds of changes at the HKO site. Now that typhoon season is here, it is helpful to receive weather alerts of Rain Storm and Typhoon warnings right on my iPhone.

This is not the only app that does it, but it is one of the better ones.

Free
This is my built-in Notes app replacement. The reason I started using Simplenote is because iOS never used to synchronize notes from the Notes app. Although iOS 3.1.x and 4.x do, I am still sticking with Simplenote.

One of the main reasons is its instant synchronization in the background to the versions on the server, therefore the instant I open Simplenote else where; given an Internet connection, my most up to date notes are immediately available.

I also do not have to worry about backing up my notes as they are always synchronized to my account at the Simplenote service.

USD1.99
The full name is “Convert ~ the unit calculator” as there is another app of the same name. This is a beautifully designed app from the Tap Tap Tap guys who also made another app, Camera+ (removed by Apple from App Store), I like but falls into my Page 2 on the iPhone due to its lack of watermarking.

Convert is able to convert almost any units you can think of including live currency exchange rates. You may say there are hundreds of conversion apps in the iTunes App Store for the iPhone that does similar functions, so why this one? The reason I stick to this app is because of its ability to perform mathematical calculations right inside the conversion edit field and instantly converts the result.

When you see the user experience (UX) of this app you will fall in love with it as I had.

USD9.99
This is a task manager by the developers at Culture Code, it is based on the GTD (Getting Things Done) system. There is an OS X and iPad version of this app, and they synchronize to ensure all task statuses are up to date.

USD1.99
This is an app that serves as a front end to the Ping.fm message dissemination web service. It allows you to post the same message across many online communities, like: Facebook, Twitter, LinkedIn, Jaiku, etc. at the same time, of course only when it is suitable to do so.

I use this when I have a message I want to post to several different communities like an announcement or question.

USD4.99
There are many different Twitter clients on the iPhone and I have reviewed several of them in the past, but SimplyTweet is always the one I come back to.

One of the main reasons is its support for multi-account through out the functionalities of the app. There are some areas that still require improvements, but that is another reason why this app stands out among the many Twitter apps in the iTunes App Store. Each time the developer updates the app he lists out almost all the bug fixes and in most cases he will also include new functionalities.