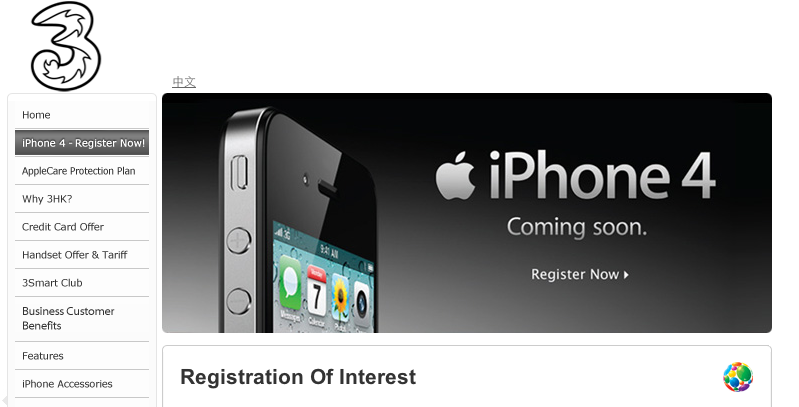 Like Smartone-Vodafone (SMV) last week, 3 HK also begins to accept registrations for the iPhone 4. Unlike SMV, 3 HK has the foresight to ask for more details from the potential iPhone purchaser. Like, colour and capacity of the iPhone 4 they intend to purchase.

Not sure why SMV did not ask similar questions, since these information will give the carrier a much better idea of the different models of iPhone 4 to stock. It could also be the experience of 3 HK as Apple Carrier Partner for the past 3 years, but SMV had also became an Apple Carrier Partner in Hong Kong since earlier this year. Another reason SMV did not ask specific questions from its potential customers may be the limited supply of iPhone 4 Apple HK has prepared for the initial launch in Hong Kong. Given the high demands in the 5 initial launch countries and the number of countries (9) in the second phrase launch.

For either carriers there are no commitment on the part of the registerer to purchase the iPhone 4, so in anticipation of the high demand will people register with both carriers?

Remember all iPhones sold through official retailers in Hong Kong are SIM-unlocked. The iPhone 4 is expected to be the same, along with the iPhone 4 sold in Canada, France and UK.