Early this year both PCCW and CSL launched their HSPA+ network. As a result improving the speed and capacity of their respective networks. Offering a theoretical downlink speed of 21Mbps and uplink speed of 7Mbps.

The difference between SMV’s announcements and the others, is that SMV also released a document to clarify the theoretical speed of HSPA+. Where as other mobile carriers in Hong Kong and elsewhere in the world, only focused on marketing the HSPA+ networks’ capability of 21Mbps speed, leaving the actual ability to achieve 21Mbps as small prints in their promotional materials. Such practices of these other mobile carriers are very misleading for layman consumers. I will attempt to explain further, to help clarify this theoretical speed of HSPA+ for layman consumers.

The ability to achieve a downlink speed of 21Mbps on any HSPA+ networks depends on many uncontrollable factors. Not to mention the availability of client devices that are compatible with HSPA+ networks. The user with the HSPA+ compatible device will need to satisfy all of the follow: 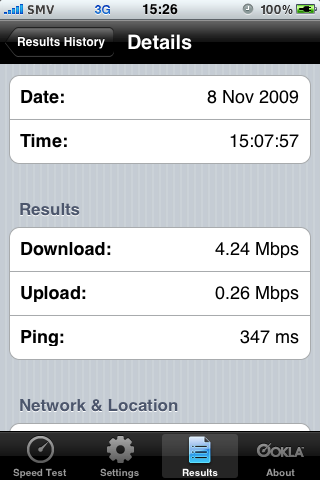 As you can see from the above it is impossible to achieve such a scenario in real life.

In an effort for SMV to be transparent and honest to its customers they lay out the explanations for this theoretical speed in a web page on their web site, The truth about broadband speeds.

I will give SMV HSPA+ network a try in the coming weeks and will report back after I do.

In the mean time I have already noticed improvements on the SMV 3G data access speed in the recent days. This is most likely due to the additional capacity gained by the HSPA+ upgrade.

13 Replies to “Speed of 3G Network in Hong Kong”