Over the years many Twitter clients had come and gone on various mobile phone platforms: iPhone, Blackberry, Android, etc.. Some great ones like TweetDeck, Tweetie, Echofon Pro (formerly TwitterFon) and some flops like TweetStack.

I’m glad to see other developers are still trying to out do its established competitors. Recently I came across such a developer, MotionObj, in the form of SimplyTweet. The version I reviewed here is 2.3.

In the past I had enjoyed the Grouping feature of TweetDeck its ability to synchronize created Groups across multiple TweetDeck clients, and the simplicity of the free Echofon. 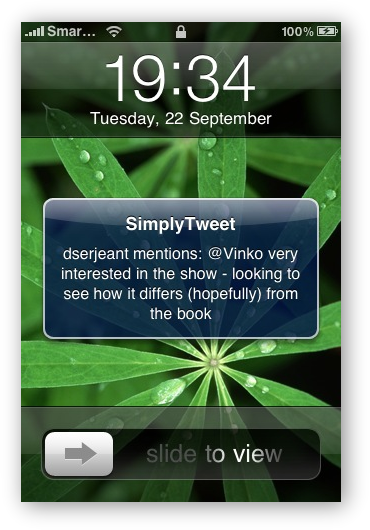 SimplyTweet has a simple UI and UX, with many of its features layout logically and readily available.

At the top right hand corner is the icon to allow the user to create a new tweet at the bottom is a toolbar containing 5 icons of your choosing. Both of these are the only constant elements on most of the  main screens in SimplyTweet. By default the bottom toolbar has the Friends, Mentions, Messages, Search and More icons shown. You can customized the icons shown in the bottom toolbar by going into More -> Edit button. 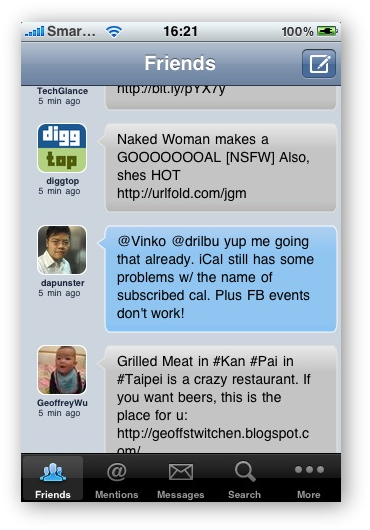 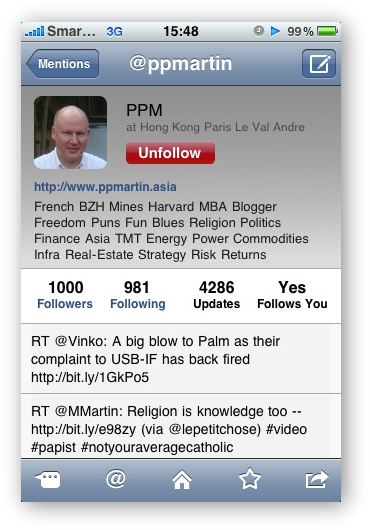 Clicking on the left side of the tweet will bring up the Profile page for the author of the tweet. 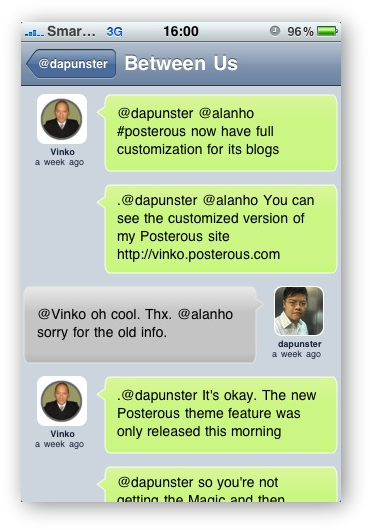 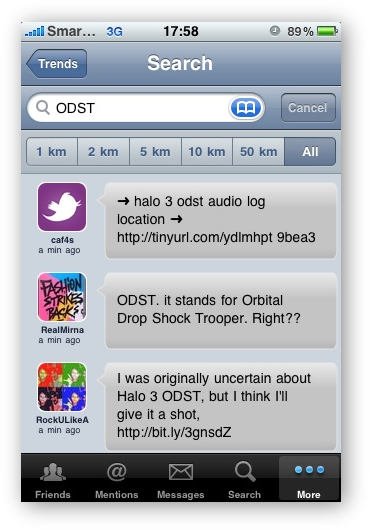 Clicking on the top right hand corner New Tweet icon will create a DM to the individual in question, additionally you have the option to add multiple recipients to your message. 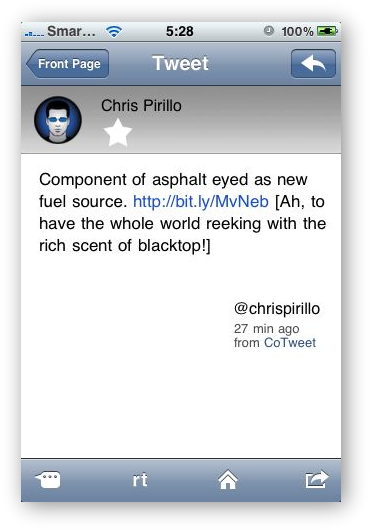 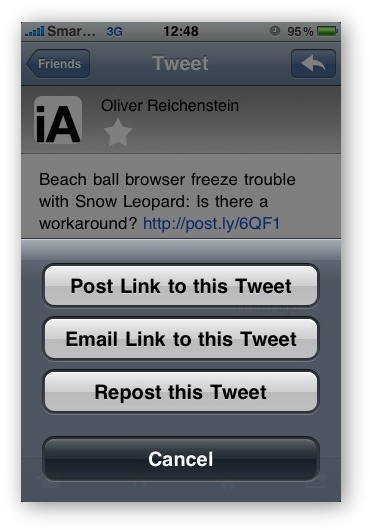 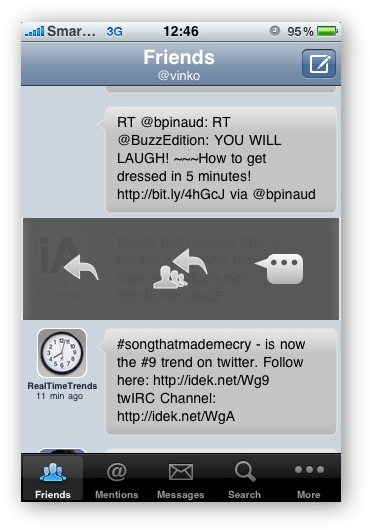 An unique feature to SimplyTweet is its ability to send a reply to multiple tweets right from one of the Timeline screens by bringing up the Tweet Options menu. The menu would overlap on top of the tweet in question and the user is presented with the option to: Reply to the tweet, Reply to multiple tweets, or see the conversation behind the tweet in question. 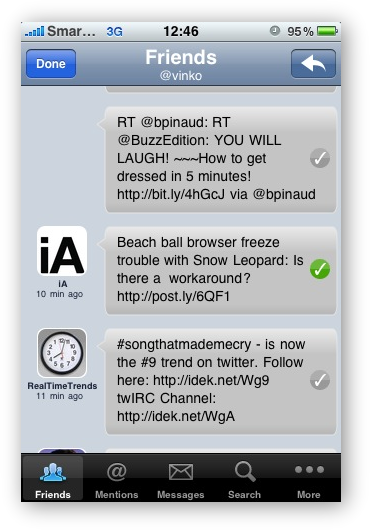 This is just one of the examples, that shows the developers of SimplyTweet have carefully thought through the various different use cases of a Twitter user, and try to deliver features in the application to cover as many of  these cases possible. The more I use the application the more I encounter these thoughtful features. As a result this review took me much longer to do than normal, because I want to give it the time it deserves. 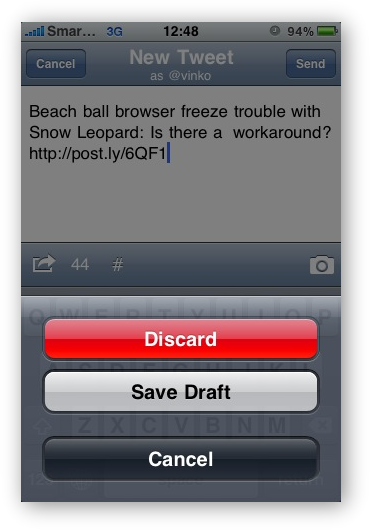 Another interesting feature is SimplyTweet’s ability to let the user save a tweet in progress as draft for later post. Although, it was only from experience that found out that there can only be one draft tweet at a time.

The New Tweet screen, here you can find the all important features of counting the number of characters, within the 140 characters limit, remaining for the tweet. One good thing about this counter is that it also take into the length of the URL of any attached photos. 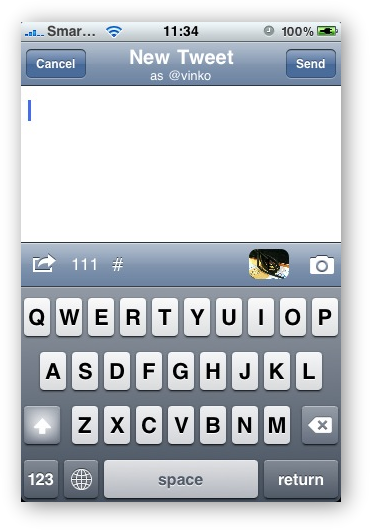 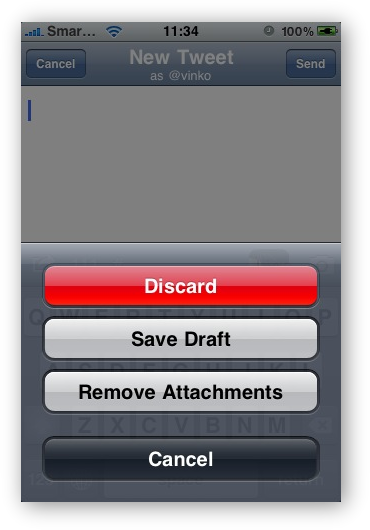 Speaking of photos, there is a Camera icon in the New Tweet screen to allow the user to choose one or more photos/videos from the iPhone’s built in Camera Roll, or take a photo/video with the built in camera (video applies to the iPhone 3GS only). Although to discard this attached photo/video is a bit unintuitive, this feature is hidden under the list of options after clicking on the Cancel button.

I wish there is a way to remove a photo/video when browsing the list of attachments. 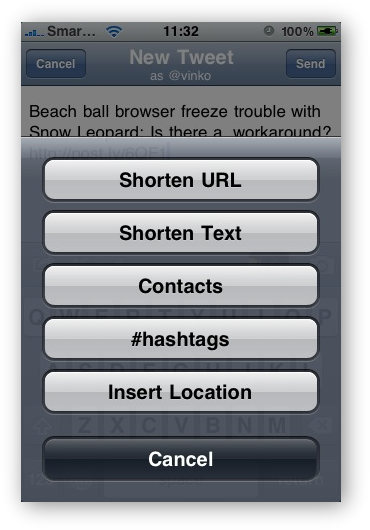 Also on the New Tweet screen is a More Options icon, which brings up a list of tools one can use in relating to the tweet in progress: Shorten URL, Shorten Text, append a reference to a friend, append a recently used hashtag, or append the URL to the Google Map representation of the user’s GPS location.

Unfortunately, there does not appear to be a way for the user to choose the URL Shortener Service that the application use, or at least I had yet to find it.
[Updated: Sep 29, 2009, 12:49]
As mentioned earlier in this review, there is a great deal of features in this application and it takes some time to discover them all. I totally forgot the SimplyTweet’s Settings module in the iPhone’s Settings section. This is where you find the ability to change the URL Shortener Service among others: 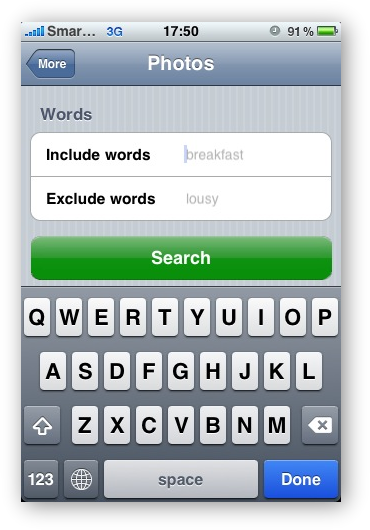 Aside from a tweet Search feature that allows the user to filter the results based on geographic distance to the user’s present location, SimplyTweet also has a Photo Search. Where by the user can use inclusive and/or exclusive keywords to find photos posted on the Twitterverse. The results are presented in a 4 x 5 thumbnail grid, and the fit of a photo to be included in the search results is by the keywords in the associated tweet. Although I have yet to determine if 20 images is the maximum number of images it will return. 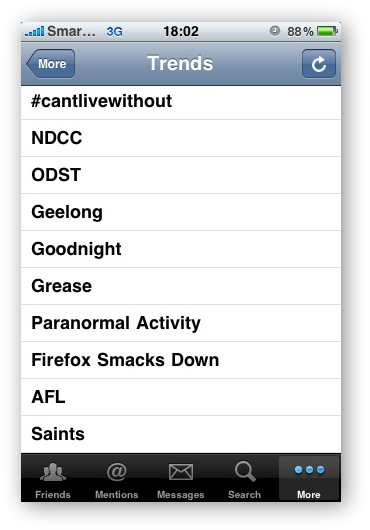 Among the Photo Search feature found in the More icon within the main toolbar are other features of interest. They are: 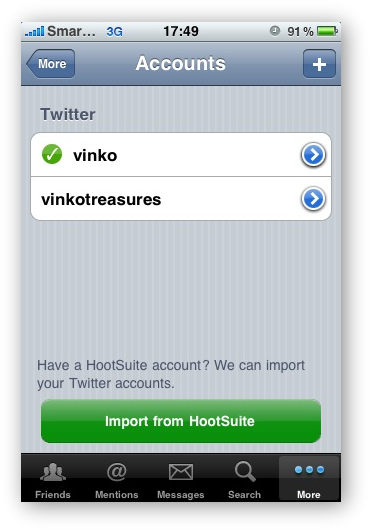 The concept of Views is similar to Groups in TweetDeck and other Twitter clients. It is a way to organize the list of friends for the current Twitter account. I always believe this to be a very important functionality of any Twitter client for users who have more than a 100 friends on Twitter. Especially if these friends are talkative.

[Updated: Oct. 22, 2009, 10:00]
Today SimplyTweet upgraded itself to 2.5, further improving many of its existing features and adding several new ones; like TextExpander (one of my favorite tool on my Mac) support. Here is a list from the developer:

Regular users of Twitter web site, who do not use any 3rd party clients, may not understand why a Twitter client can be difficult to create. Existing users of other Twitter clients will appreciate the efforts the developers of SimplyTweet put into the application. Any new, Twitter client users, will find themselves becoming more advanced users just by using SimplyTweet to handle their daily Twitter needs.

The USD4.99 that the developer is asking for in the iTunes App Store is align with most other paid Twitter clients on the high end, but in the case of SimplyTweet it is well worth the money.  I would pay even more for the treasure trough of features I have discovered after using the application for just two weeks.

For readers who are still not convinced MotionObj does have a Lite version of SimplyTweet for free, but without many of the features that made SimplyTweet stands out among its competitors.