Heard about this new restaruant on Ship Street, Wanchai, Hong Kong called, “Bo Innovation”, so I decided to go check it out tonight. Not sure if the chef/owner planned it that way, but the name “Bo innovation” sounds very much like “bold innovation”.

Unlike most recent new restaurants in Hong Kong; particularly the ones on Ship Street, this is not just an Asian fusion restaurant. It calls itself a “X-treme Chinese cuisine”, which you will find, after a visit, is a very appropriate description.

Before going in, I had no particular expectation, except restaurants on Ship Street had become trendy and chic. As a result I was expecting nothing less.

END_OF_DOCUMENT_TOKEN_TO_BE_REPLACED

Another great movie! That’s two in a row, two weeks ago was Hancock and two weeks before that was Wanted. This is the best Batman movie I have seen thus far.

There was enough continuation from the last Batman movie, Batman Begins. Just the appropriate amount of draw from the plot of the previous movie in the sequel. Definitely, the best looking Batman outfit of them all.

The one thing I did not like about the movie, was the directory or set decoration to hide the city where they filmed Gotham City. In the past Gotham City has always been this make believe or futuristic city where a super hero like Batman would appear.

One of the best part of the movie, like in Batman (1989), was the character The Joker. In the 1989 version of Batman, The Joker was played by the amazing Jack Nicholson, this time it was played by the late, Heath Ledger of Brokeback Mountain fame.

Another thing this Batman movie tries to do, is to explain the origin of Harvey Dent (aka. Two-Face), this time played by Aaron Eckhart, this character first appeared in the 1989 version of Batman, played by Billy Dee Williams then again in Batman Forever by Tommy Lee Jones. As a result it is a good sequel to Batman Begins.

All I need to do is collect these Batman movies since 1989 and put them back in chronological order, I will have a complete picture of how each of the villains came about.

If you are a Batman fan, this is definitely a must see. If you are not, still go see it, you will not be disappointed.

A new version of WordPress has been released. It contains one of the features that I had been waiting for a long time; ever since I started using WordPress to drive my own blog. That is the feature of comparing revisions and be able to bring back previous versions. Similar feature can be found on Wikipedia.org.

Instead of pointing you to the blog post about WordPress 2.6 new features, the folks at WordPress have made a short video to highlight these new enhancements.

If you’re going to attend one of the 2008 Olympic event venue (in Beijing, assuming this also applies to venues in Hong Kong and Qingdao), be sure you are familiar with all the regulations that Beijing Olympic Committee has issued to the public.

You can see these regulations below:

Restricted articles include hard-packed drink and food; fragile articles; musical instruments; carry-on bags, suitcases and handbags which are too big to carry to the seats; flags of countries and regions not participating either in the Beijing Olympic Games or Paralympic Games and other flags over two meters in length or over one meter in width; flag poles of over one meter in length; banners, leaflets, or posters; unauthorized professional videotaping equipments; knives, bats, long-handle umbrellas, long poles, sharp-ended stands for cameras and video cameras, and other objects that may cause harm and injury to people; animals (with the exception of guide dogs); vehicles (except for strollers and wheelchairs); unauthorized walky-talkies, loudspeakers, radios, laser devices or wireless devices that interfere with the electronic signals of the Olympic Games.

The rule deemed the following behavior as inappropriate: smoking at a non-smoking area; crossing over the guardrail; using umbrellas or standing up for a long period of time in the seating area, thus obstructing the field of vision of other spectators; and flash photography.

The rule banned weapons and equipment including guns, ammunition, crossbows, and daggers; fireworks, firecrackers and other flammable materials; corrosive chemicals and radioactive materials.

There was a report last night that the iPhone 3G sold by the carrier, Three, in Hong Kong is unlocked; meaning it is not tied to a specific carrier.

This news was a bit hard to believe as news from other countries like US, Japan, Australia and New Zealand, the iPhone 3G sold there are all locked to the respective mobile carriers.

Therefor, if you do not want to stick with Three’s service you now have a choice, but the cheapest choice is: 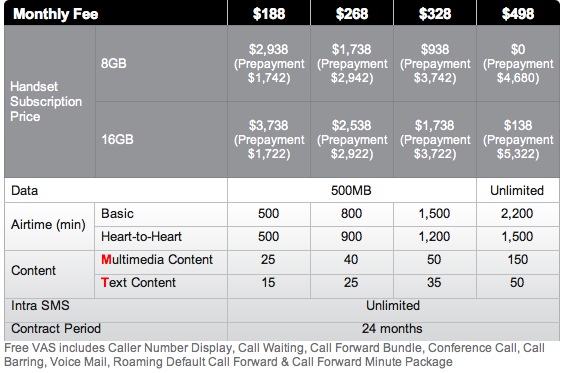 Now I have first hand confirmation from a friend who purchased one of these iPhone 3G at Three HK. He was able to put in a PCCW SIM card while having full access to all functionalities of the phone including EDGE and GPRS functions.

Is this really worth it. I say not, especially if you already have an iPhone (1st generation). Wait for the other carriers in Hong Kong; namely PCCW and/or Smartone-Vodafone receive the rights to sell the iPhone 3G.

Apparently the highly anticipated Apple iPhone 3G will only be available to the selected few, at least in Hong Kong.

Yesterday, O2 began announced that their pre-orders for the iPhone 3G had been filled and ask interested customer to return to their web site on July 10th to find information on new inventory and next availability.

Similar situation in Hong Kong with Apple’s partner carrier, “3”. I have inside sources informs me that their initial inventory of 500 Apple iPhone 3G had already been sold out 2 weeks ago. There was no limits placed on the number of phones each person were allow to purchase. Therefore, some of the selected few were able to purchase a dozen iPhone 3G, while the rest of us, under privileged in the eyes of Li Ka Shing’s mobile carrier “3”, will not be able to get an iPhone 3G on Friday, July 11th, even if I am willing to change carrier and choose one of the high tariff plans offered. Of course, I am not, so I am not too concern.

For the rest who are already a 3 customer or willing to switch carriers, I think this is very unfair and Apple HK should have been managed the situation better. Although, this sort of insiders privilege is a common occurrence in Hong Kong, Apple HK should have imposed a maximum purchase quantity so that as many individuals can share the Apple experience and privilege of owning an iPhone 3G on July 11th.

Another very good movie by Will Smith. Further proofs that he is a super entertainer: actor, singer and stand-up comedian.

The last movie I watched with Smith was The Pursuit of Happiness, where you can read my review of in my blog, in which he played a totally different character from his typical roles. Like the the previous movie, in Hancock Smith played a down and out character (John Hancock) with super human power that no one likes.

I thought it was very clever of the writers to name the character “John Hancock”. Half way into the movie the plot made a sudden unexpected twist.

I did not recognize Charlize Theron until the end of the movie when I saw the credits, but I did find the actor very familiar through out the movie. She must have changed her look or matured over time, she no longer have the baby face that she had in past movies.

I am giving it a 4 penguin and you should give it a chance, I am sure you will find it entertaining.

As with everything that Apple does in the past 24+ years, everyone tries to copy what they do.

We saw it with the removal of a floppy disk from a computer (1990s). Initially the critics were criticizing Apple for removing the floppy disk being a stupid idea. Then manufactures begin to imitate what Apple does. Eventually we saw the death of floppy disk and drives.

Apple added Firewire (IEEE 1394) ports (late 1990s) to all their computers and “uneducated” critics thought that it was a proprietary port that Apple force upon consumers and was a waste.

Apple promoted the use of CD-R drives on all their computers, again critics claims that that was a stupid idea as CD-R media was too expensive and say that no one will need such large amount of storage for personal use. Apple does not listen and sent out all their Developers Program media on CDs only.

Apple took the MP3 player, redesigned it and released the iPod in 2003, the same critics come along and claim that Apple is just imitating manufactures like iRiver and others who had MP3 players in the market for years. What Apple did instead was reinvented the mobile music concept with the 3-prong team of the iPod, iTunes audio jukebox and the iTunes Music Store.

Competitors try to imitate what Apple had done, by coming out with what they claim “iPod killers”, which are devices that look like the iPod superficially but does not have the usability, nor do they have iTunes or the iTunes Music Store.

Others also try to over throw Apple’s lead in the online music retail by launching their own online music stores to compete with Apple’s iTunes Music Store, but again they do not have the iPod or the iTunes music jukebox.

In 2007 Apple released the iPhone 2G and changed the mobile phone industry. What they had done was to push the envelop of mobile phone design. They did not try to just create an extraordinary mobile phone, they also wanted to create an ultimate mobile connected information device. In doing so caused all the competitors to rethink their own mobile phone design directions.

Some critics criticizes the fact that the iPhone is not comparable to most high end smart-phones from Nokia, Sony Ericsson, LG, HTC, etc., but what these critics keep missing is what Apple claims the iPhone 2G is capable of and that Apple is using the iPhone 2G as the first-device for the platform.

Over the years Apple had mostly been successfully in setting the expectations of their customers and audiences for Apple products and services. With the launch of the iPhone 2G on June 29, 2007, Apple released numerous amount of information; including videos, of what the iPhone is and the various things one can do on it.

Similarly, AT&T wanted to do the same expectation management with the launch of the iPhone 3G, and created the AT&T iReady program; including videos. What the iReady program and accompany videos did was to highlight the complexities of purchasing a mobile phone from a carrier and how poor a shopping experience it is.