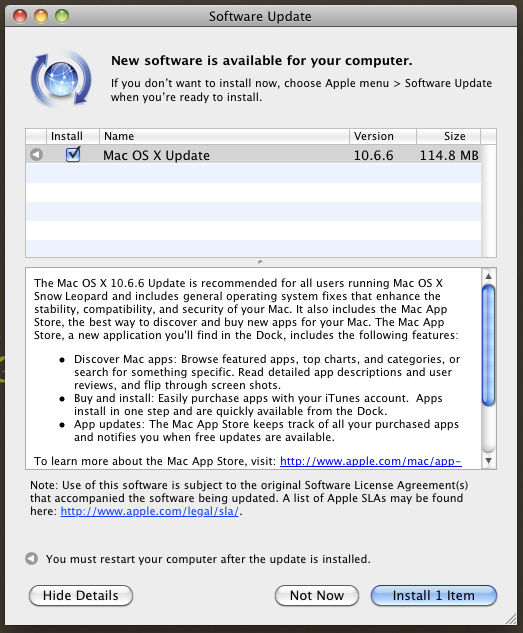 Aside from the list of fixes the latest version of the Mac OS X (v 10.6.6) finally enables the highly anticipated Mac App Store. You can either get the update from Apple Software Update or you can download the Combo Updater from Apple’s Support site.

You can read Apple’s Knowledge Base article on the list of fixes.

Many people are tempted by the low cost of Apple products in Hong Kong compared to all other countries around the world, including USA. They are most attracted to the factory SIM-unlocked iPhones sold through official Apple resellers and Apple HK store online.

So they are tempted to purchase one or more of these products while they are travelling to Hong Kong. Making a purchasing decision like this should not be taken lightly. Aside from the cost, for any electronic product there should also be consideration of warrantee.

END_OF_DOCUMENT_TOKEN_TO_BE_REPLACED 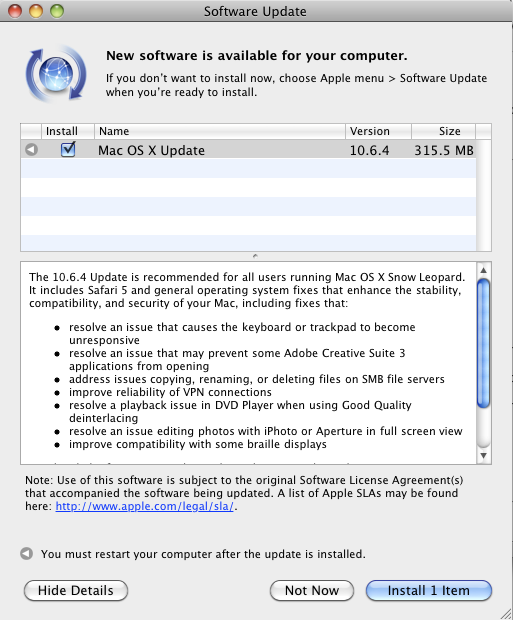 As promised Apple just made available Mac OS 10.6.4 for download.

There are two Knowledge Base articles to describe what have changed in this latest OS X release. The first is “About the Mac OS X v10.6.4 Update” and the other is an “About the security content of Security Update 2010-004 / Mac OS X v10.6.4“.

As with all other OS X updates I recommend that you download the Combo Update and then apply it to your Mac.

The new applicaiton is a very basic that fucntions exactly what you expects a Kindle application on the Mac does. It downloads your purchased Kindle books from Amazon, so you can read them on your Mac. The application also use Whispersync to synchronize the spot in the book where you left off when you last read the book. The functionality is not that much different than the Kindle for iPhone app. The only major addition is the Mac version’s ability to resize the screen displaying the book.

END_OF_DOCUMENT_TOKEN_TO_BE_REPLACED

As all of you know the pending release of Apple’s latest version of OS X, version 10.6 (aka Snow Leopard), will be available this Friday, August 28th.

To help you decide whether to purchase this upgrade, or more precisely, whether the applications, utilities and plugins you’re using are compatible with OS 10.6. There is a Wiki created to track such information.

So before you rush onto Apple Online Store or other online retailers to place your pre-order. You may want to run down the check list first. See if one of the applications you depends on is on the list. If it is marked as not compatible, you may want to check with the developer before making your purchase. 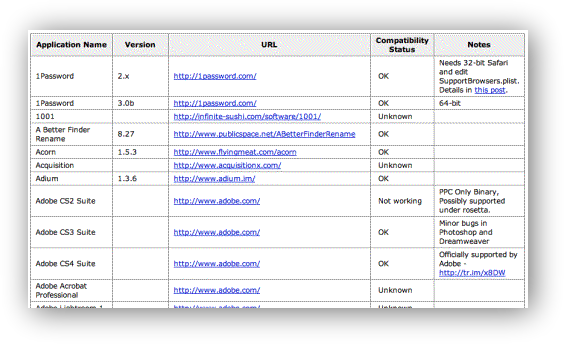 If you rely on 1Password daily and does not want to use beta class software, I would NOT recommend installing the final release of Safari that Apple released last night (HKT).

The Safari 4.0 final version broke the 1Password plugin for Safari and the previous hack does not work.

The 1Password veresion that works with this version of Safari is the latest 2.9.19 beta 2 (build 7499), which according to the developers is a “final candidate”. So if you’re not the type who is comfortable using beta software, then you should not have too long to wait before 1Password 2.9.19 final is released.

[Update: June 9, 11:27 HKT]
Just received an update from Agile Web Solutions, they had finalized 2.9.19 and brought it out of Beta status. So it is now safe to upgrade to Safari 4.0 even if you use 1Password.

Twenty-five years ago Apple released the Macintosh computer. With its original (arguably) approach to computing and Human Interface, it immediately changed the personal computer market, and introduced the concept of GUI. Ever since that day Apple continued to innovate, coming up with original approaches to product design and User Experience. For that, I had been happily using the various models (11 in total) of Macintosh for the same number of years.

Tomorrow is Macintosh’s quarter of a century anniversary; although I am much older, I too will be celebrating a birthday of my own. Is it a coincident that the Mac’s birthday and my own are on the same day? For those who believe in fate may think otherwise.

Over the past 25 years Apple had its ups and downs, with the worst few years during the mid 90’s when Apple’s co-founder, Steve Jobs, was forced out of the company. Upon his return in 1998 the company was transformed once again, which we saw the introduction of the iMac, Macintosh Cube, iPod, Mac Mini, MacBook Air, iPhone and unibody MacBook.

In recent weeks, Apple fans received much news about Apple and its co-founder, Steve Jobs. Through out the Interweb, there are numerous analyses of what these all means, so I will not dwell on these subject further. I personally wish Steve Jobs and his family the best and may he get well soon. At this point it really doesn’t matter if Jobs returns to Apple or not, if he does it will be a bonus to Apple and its faithful customers (followers).

Apple released Mac OS 10.5.6 update on Monday (US PST). As always I would suggest everyone follow the instructions on the release notes plus use the Combo Upgrade to upgrade your Mac.

Although, if you are the millions who owns iPhones that had been jailbroken and/or Unlocked, you need to stay AWAY from this Mac OS X update for now. It has been reported that this version of Mac OS X will not recognize hacked iPhones. Until either this report has been independently verified or until the iPhoneDev Team has a method to get around the problem, hacked iPhone users should stay avoid updating their Macintosh for now.

Please stay tuned here, I will update everyone as news develop.

[Update: December 17, 2008]
The iPhoneDev Team has released a note addressing the issue reported regarding the problem with activating the DFU (device firmware update) mode for the iPhone, after the Mac has been upgraded to Mac OS 10.5.6.
The next release of the iPhoneDev Team’s Pwnage Tool is not expected until Christmas Eve (Dec. 31.2008), but there is no mention if this upcoming release will resolve the DFU problem.

[Update: December 19, 2008]
Finally an Automator script that will perform the fix suggested by the iPhoneDev Team. This method will not require a layman to jump into Terminal and fuzz with the inner workings of the Mac.

I have yet to try this so will report when I have.

[Update: December 20, 2008]
Now there are two solutions: one is to connect the iPhone to the Mac via an USB hub. The other is to replace the IOUSBFamily.kext with the version from 10.5. Someone had created an AppleScript to do this for you as explained in the iPhoneWiki forum thread.

* All currency in HKD

This new line of Macintosh notebooks cause me to be indecisive about my justification to upgrade my current MacBook Pro (October 2006, Glossy Screen), 2GB of RAM, 2Hz Intel Core Duo, 100GB 7200 rpm Hard Drive. Let me get into the details so you can decide whether you have the same issues.

These new MacBooks have many technical advancement in terms of manufacturing and user interface. There are hardware in the Mac that the upcoming Mac OS X (10.6) will be able to take advantage and make these efficiencies available to all applications running on the new Mac OS X.

END_OF_DOCUMENT_TOKEN_TO_BE_REPLACED

This morning at 10:00 (PDT) in Cupertino, CA, USA, Apple held an event to announce the new MacBook Pro, MacBook and speed bumped the MacBook Air.

The entire line of MacBook, MacBook Pro and MacBook Air are now using the same construction method, where the case is created from a single block of Aluminum. Making the case much more rigid.

Apple has also removed the button from the TrackPad, and introduced a new multi-touch TrackPad with a 4th gesture; 4-fingers gesture.