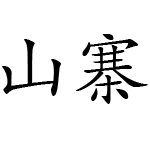 There are more and more knock-offs (Shanzhai 山寨 in Chinese) coming out of China, the authenticity of these products are getting better and better. Of course I’m only referring to the esthetic appearance and not the quality or workmanship. The latter is the reason why counterfeit goods are worth while business for those involved.

In most cases counterfeit sellers are trying to scam people looking to buy the real thing. In the past clothing was the most popular counterfeited products, but as more and more authentic clothing brands begin to manufacture their products in China, counterfeiters no longer have the advantage of cheaply made goods. These factories begin to produce extra pieces to sell in the gray-market or they start to sell rejected items as factory-outlet items.

In recent years these differences between counterfeit and authentic handbags draw smaller and smaller. In many mainland China handbag shops selling counterfeit versions, will display real retail catalogues from the brands for customers to choose. This serves to demonstrate to the customers that the model/colour/pattern and combinations do indeed exist from the respective authentic brands, it also help them avoid carrying too many counterfeit items at the store premises.

So far these counterfeit consumer items from mainland China have not hurt anyone other than the original brand/copyright holders. But ever since Hong Kong’s SARS outbreak, mainland Chinese counterfeiters have started to produce fake food products. These items actually hurt people who consume these fake food; in many cases causing deaths.

In the past several years counterfeit products in another industries have also matured. Mainland Chinese counterfeiters begin making fake Apple products and other hot selling electronic items from various manufactures. These fake products are so real from their appearances that it is often hard to tell the difference until one begins to use them.

So how can the brands fight back? Is lawsuit the answer? Can foreign government treaties stop the counterfeiting? Not likely.

The tactic most brands take is to open their own stores in mainland China, making their respective products easier to acquire by Chinese consumers. This is an effect stop gap for counterfeit products, because in most cases Chinese consumers do want to purchase authentic items. But by the time these items are imported into China and local retailers add their markups, the retail prices are just too high.

Recently Abercrombie & Fitch lost a lawsuit against a mainland China retailer, in which A&F claims the retailer of selling counterfeit A&F products. You would think since there are no authorized resellers for A&F products in Asia, A&F’s claims should be easy to proof and win. That was not the case, because during the hearing the A&F expert could not tell the difference between the counterfeit and the authentic A&F products.

Did this failed lawsuit deterred A&F? No, A&F will open their first Asia retail store in Hong Kong 2012, taking over the space previously occupied by Shanghai Tang at one of Hong Kong’s most historic building, Pedder Building, and paying HKD7 million per month in rent for the privilege. Gap will also do the same; although not Asia’s first, and opens around the corner in the vicinity at the heart of Hong Kong’s business and high end retail district. I hope A&F will take this opportunity to bring their other sister brands: Gilly Hicks Sydney and Hollister California to Hong Kong.

Will these actions by the major brands finally stop the counterfeiting? Only time will tell.

One Reply to “China Counterfeit Explodes”