Today while taking photos in Causeway Bay I came across this flyer that a group was passing out.

It is about Ani Ashekian (30 years old) who has been missing since November 9, 2008, and last seen in Hong Kong.

I urge everyone who reads this blog to help spread the word, send any information about Ani’s where about to FindAni@gmail.com and join the Facbook group “Missing: Ani Ashekian”.

I wish Ani Ashekian, a fellow Canadian, a safe return to her family and friends very soon. 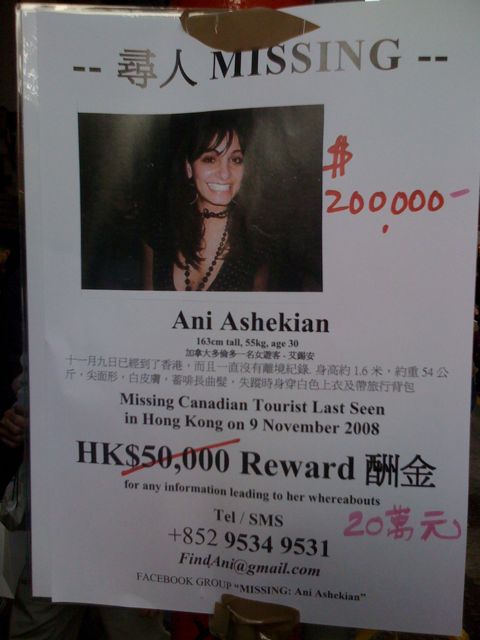 END_OF_DOCUMENT_TOKEN_TO_BE_REPLACED

This afternoon I saw the movie The Curious Case of Benjamin Button at UA Cinema, Time Square, Causeway Bay, Hong Kong. Another one of the movies from my Must See Movies list.

The plot of the movie is fairly typical but with a special twist. It is about a man, Benjamin Button (played by Brad Pitt), who was born with an old man’s body and died as a baby.

The special effects and makeup were quite amazing. Although one would not expect special effects to play an important role for a movie like this. It enabled the team to transform Pitt, a 46 years old in real life, into a young teenager. The other side of the transformation was to make Pitt into a convincing 70 years old, which was the creativity of makeup artist, Greg Cannom.

Cannom’s artisan included the transformation of Pitt’s body into an old man’s, along with sagging chest and flabby stomach. This efforts earned him an Oscar nomination, “Achievement in Makeup”.

For some reasons this movie reminded me of Tim Burton‘s Big Fish (2003). I guess it was the cinematography and the fantasy nature of the plot. There is a questionable yet believable feel for the events that transpire throughout the movie.

Pitt delivered his usual great performance, convincing the audience he was indeed the age the character was going through. Enough so that it earned him an Oscar nomination for “Performance by an Actor in a Leading Role”. One of his supporting actresses, Taraji P. Henson also had a great performance, earning an Oscar nomination herself for “Performance by an Actress in a Supporting Role”. In total the movie racked up 13 nominations at the 81st Oscars to be held on February 22nd.

This is definitely a movie for fans of Pitt, but anyone into fantasy and stories of Eric Roth should not miss either.

Many of you know I am not superstitious, although true to my tradition that I started a year ago.

May you all have a prosperous new year!

Even though my Chinese is not that good, I too notice the mistake in the poster, which had been distributed throughout Hong Kong.

Are the standards of our young generation that poor? The worst part, is that it demonstrates the lack of pride Editors of Hong Kong newspapers have for their jobs. Twenty-five years ago Apple released the Macintosh computer. With its original (arguably) approach to computing and Human Interface, it immediately changed the personal computer market, and introduced the concept of GUI. Ever since that day Apple continued to innovate, coming up with original approaches to product design and User Experience. For that, I had been happily using the various models (11 in total) of Macintosh for the same number of years.

Tomorrow is Macintosh’s quarter of a century anniversary; although I am much older, I too will be celebrating a birthday of my own. Is it a coincident that the Mac’s birthday and my own are on the same day? For those who believe in fate may think otherwise.

Over the past 25 years Apple had its ups and downs, with the worst few years during the mid 90’s when Apple’s co-founder, Steve Jobs, was forced out of the company. Upon his return in 1998 the company was transformed once again, which we saw the introduction of the iMac, Macintosh Cube, iPod, Mac Mini, MacBook Air, iPhone and unibody MacBook.

In recent weeks, Apple fans received much news about Apple and its co-founder, Steve Jobs. Through out the Interweb, there are numerous analyses of what these all means, so I will not dwell on these subject further. I personally wish Steve Jobs and his family the best and may he get well soon. At this point it really doesn’t matter if Jobs returns to Apple or not, if he does it will be a bonus to Apple and its faithful customers (followers).

Driving into work this morning from Wanchai I came across this same Google Prius with the Street View cameras mounted on its roof.

This is really good news, because it means that Google Street View feature will be available for Hong Kong maps on Google Map.