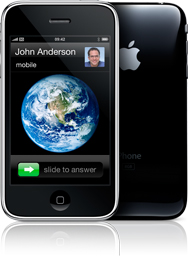 Apple HK made the iPhone 3G available to everyone with a HK shipping address via Apple Hong Kong’s online store.

This made Hong Kong the hub (and “source”) of iPhone 3G that are free from the shackle of the money hungry, backward thinking mobile carriers. As of the writing of this post Apple Hong Kong’s online store shows a 24 hours delivery time and free shipping. I am certain when news spread of this availability, the inventory will go quickly.

I was always against the idea of having to commit to Three HK for a 2-year contract just to gain the privilege of purchasing an Apple iPhone 3G. Now I have less of a barrier to bring this great device to the mobile carrier of my choice (“Smartone-Vodafone”).

Ah… my first generation iPhone worth even less now. Them are the breaks, especially with technology devices.

Is this move by Apple a sign of things to come for other (47) iPhone selling countries? Is this Apple’s way of changing their strategy to put as many iPhones in the hands of consumers as possible? This has always been one of the pain points of critics.

In hindsight, did Apple make the right move, by first capitalizing on the revenue gain from the few carriers reselling iPhones, Apple not only stir up the excitements for the device, but was also able to string the carriers along with the privilege of exclusivity.

Steve Jobs always says that Apple is a software company focus on delivering the best, complete user-experience to the end-users. Assuming this action in Hong Kong is indeed a change in Apple’s iPhone strategy, this means they are indeed focusing more on what one can do with the iPhone rather than simply selling iPhones. You can say it is a means to an end.

As a result more focuses will be placed on the AppStore in iTunes Store, and the debacle approval process that Apple had employed thus far for 3rd party applications. If Apple really going to focus on what one can do with the iPhone; aka software, then Apple will need to improve the development process, making it much more seamless and less of a walled garden.

May be Apple should consider the Mac OS X and Darwin approach, where it takes an open operating system like FreeBSD created Mac OS X and then released a version of it as Opensource called Darwin. Imagine Apple taking something like Google’s Android, transform it into a new version of Mobile Cocoa and then contributing back to the Opensource Android platform.

With this proposed approach Apple will differentiate itself among the handset manufactures in terms of design, which Jonathan Ive consistently delivers. And on the great user experience of the Apple version of the Android compatible mobile phone.

Back when Apple first announced the availability of the iPhone 3G to 73 countries around the world, with many of those having more than one carriers receiving the privilege of selling the phone. I had predicted the plan of Apple is to introduce the iPhone through exclusive carrier to build up the hype. Then it allows certain countries more than one carriers to sell the iPhone so that consumers receive a choice, but when the carriers not able to differentiate themselves among its competitors, Apple steps in and say, “you [the carriers] cannot say we did not let you try.”, they had for a year and a half. Now [the end of 2008] they take over and sell the phone independent of any 3rd parties and no one can complain they did not give them a chance.

If my analysis is correct, you may not want to rush out and get the iPhone 3G from Apple Hong Kong’s online store. That is because the third phase of Apple’s iPhone strategy will happen in Hong Kong when Three (“rumored”) looses its exclusivity late October. Just in time for Apple to lower the price for the Christmas shopping season.

Most people; especially the critics, need to remember that Steve Jobs manages Apple like a chess master, he is always thinking many moves ahead of all of us. So don’t be so quick to criticize his decisions. Over the years [24+], being a user of the Macintosh and making it my computing tool of choice, I have learnt to accept the fact that Apple; particularly Steve Jobs, knows better.